How Will We Remember 2020? Investing Through a Crisis

Over the holiday weekend, we watched old family videos of the kids when they were young. Clips of us playing make-believe with Brandon, Alex, and later with Tori were wonderful reminders of the past. I was happy to see that I did have more hair than I have now but realized that the videos are an imperfect store of our family history. They reflect only the times we used the video camera, mostly parties, and outings, and only captured what we did during those moments. Memories of events that have impacted our investment portfolios are also imperfect. We recall snippets of our actions and emotions, never the entire period in microscopic detail.

As we remember this year a decade from now, will our memories retrieve the sadness of loss, the fear of the unknown, or pride in having survived a pandemic and global recession?

I keep a copy of the following graph with me to help me be a better investor.

It reminds me that in my lifetime, there have been many events that impacted our lives, most having some impact on financial markets at the time. In my fifth year of managing money, “Black Monday” occurred. On October 19, 1987, the Dow Jones Industrial Average dropped 23%. I was shocked, convinced I needed to take action for my clients but unsure whether the right move was to buy more stocks or sell and protect what was left. As the stock market continued its path down, I found a small group of senior portfolio managers, hoping for guidance on whether to buy or to sell. To my surprise, they were chatting calmly over coffee and donuts. At the time, I unfairly viewed them as tired professionals, lacking the energy or the insights to take action. I was wrong. I learned that in the midst of a major event, it is often best to evaluate causes and implications carefully. Age brings experience, which enables a degree of calm.

A more recent event was the global economic and financial crisis of 2008 into ’09. Our memories of what is now commonly referred to as “The Great Recession” are clearer than earlier crises. My recollection of the fall of 2008 was that it was scary, different from anything we have experienced in our lifetimes. The savings we had invested in the stock market dropped in value by half. Every day, news included another weak bank or brokerage firm forced to be sold for a bargain-basement price to avoid bankruptcy. One did fail. Many companies did too. Those who held to their investment strategy saw their portfolios recover in five years. Most investors have long time horizons, but five years will feel like forever without the benefit of having a pool of safe, liquid investments to draw upon. You can only afford to retain a long-term view if you can survive in the interim.

Pandemics were the stuff of history books. We remember reading of The Black Plague in Medieval Europe and the Spanish Flu in 1918 was a century ago. A new pandemic was viewed as a low-probability event, and we took comfort that recent viruses such as SARS and Ebola were successfully contained. It is not surprising that many investors initially only focused on potential supply chain disruptions in China. Concerns focused on production delays in China’s Wuhan region, with comparisons made to the 2011 earthquake and tsunami in Japan. A headline on February 12th proclaimed, “Dow Closes at Record as Worries Abate.”

A month and a half later, the market value of companies around the world was a third less.

Similar to 2008, we were in the midst of experiencing something that none of us had ever experienced before. There was no precedent to guide us. We feared that economies worldwide would remain depressed for years, given all previous vaccines’ long development time. Or, life would return to normal in a couple of months thanks to stay-at-home orders killing the virus by robbing it of new hosts. We could not have known whether investment portfolios would recover more slowly than in The Great Recession or as fast as Black Monday. Investors who had more than sufficient safe, liquid assets stayed the course. Others who found the uncertainty too much to bear reduced risk and hoped for a clear sign indicating when to add back stock market exposure. 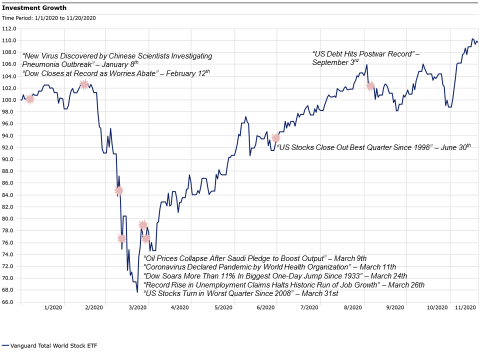 What investment lessons will 2020 teach?

Graphs, such as the one above representing global stock markets this year, generate emotions. We may feel relief that financial markets have mostly returned to pre-Covid levels, foreshadowing next year’s economic activity. We may feel regret of what may now seem a money-making opportunity; “If only I had sold in February and bought in April.” Those who are sitting on more cash than they need may feel anxious, uncertain as to whether it is now safe to buy stocks again.

The graph is an unfair judge of actions taken or not taken this year. It does not reflect the uncertainties at each point in time. On March 24th, should the headline “Dow Soars More than 11% in Biggest One-Day Jump since 1933” have encouraged those with too much cash to gain the confidence to buy stocks or be interpreted that after such a large jump, it is best to wait for lower prices?

Use graphs of past markets to remember that time horizon matters, rather than to second guess decisions that cannot be changed.

Both graphs in this blog highlight the importance of focusing on one’s investment time horizon. Black Monday in ’87, The Great Recession of 2008, and the 2020 Pandemic created anxiety as stock markets dropped 20 to 50%. Only those who changed strategy during these periods actually realized a financial loss. Investments in the stock market appreciate more than safe ones only if the investor has the ability, both economic and emotional, not to sell during a down cycle. Every cycle ends, some faster than others, but one never knows when. That is why market timing is seldom successful.

One of the most effective techniques for investors is to use time horizon buckets to match their assets with their projected needs and wants. Needs for the next five years should be in cash and fixed income. Longer-term goals, those beyond ten years, should be mostly in stocks. Intermediate needs, those in five to ten years, should be funded with a blend of stocks and bonds. The technique reduces the risk of selling stocks during market drops by knowing that the pool of safe, liquid investments is sufficient for the next five to ten years. In other words, it permits us to better focus on the long-term, positive trend shown in the first graph rather than the experience of the roller coaster anxiety of the second one.

One important note: both graphs represent the total value of all publicly traded companies in the world. Stock markets recover because economies eventually recover, consumers eventually buy goods, and aggregate profits accrue to the stockholders. The same cannot be said for any one company’s stock. Markets recover, individual companies may not.

As Adjunct Professor of Finance at NYU’s Stern School of Business, Lex teaches the MBA course on wealth management. He has a BSE from Princeton University and an MBA from Harvard Business School.
The information provided is for educational and informational purposes only and does not constitute investment advice and it should not be relied on as such. It should not be considered a solicitation to buy or an offer to sell a security. It does not take into account any investor’s particular investment objectives, strategies, tax status or investment horizon. You should consult your attorney or tax advisor.
Staying on Track – Common Questions During Market Uncertainty
2020 Year-End Review
SHARE THIS ARTICLE
JUMP TO COMMENTS
ARTICLES YOU MAY ALSO ENJOY A Sensible Approach to Allocating Wealth